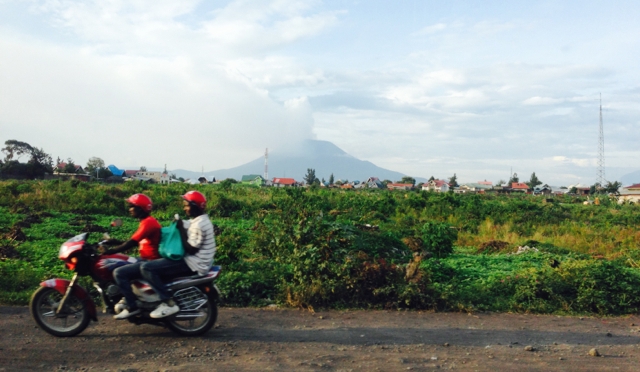 I’m working on four short blog posts that I’ll roll out over the next few weeks to sort of explain what Anne-Claire and I have been up to, and what has happened to us over the past month. Though there have been some potentially scary moments, we’ve managed to see a few new things and we certainly can’t complain about what we’ve been able to see. The raft of changes was ushered in by our evacuation from Lodja to Goma. For anyone who’s at all familiar with African politics, the fact that we were flown to Goma, the veritable seat of instability on DRC’s eastern border, should strike you as ironic, especially given the relative security and sense of safety that we’ve experienced and I’ve written about since arriving in Lodja. In fact, though, it made sense due to its proximity to Lodja by UN flights, and also because with years of instability, NGOs there have a plan when things go awry.

And that’s just what happened in Lodja last month. It’s a bit of a long story, but basically long-festering tensions between loosely affiliated (for the vast majority of the population) groups, one whose members identify themselves as being from the savanna and another whose members identify themselves as forest people. As so often happens in venial societies that engender self interest, the leadership of each group is highly centralized and manipulative of the supposed conflict for their own ends. The morning of March 25, the strongman of the savanna group, a 20-something enforcer, was shot and killed outside of his house, which happened to be right across the street from where Anne-Claire and I live, and not far from the office – where we were at the time. We had little idea that anything was wrong, until later that afternoon, when groups of young men ran past the office yelling and singing and carrying machetes. Groups of savanna affiliates set fire to houses of forest people, and we saw one man staggering down the road who had been struck three times in the head. He was bleeding a lot, but one of our colleagues saw him being stitched up at the health center a few hours later. The machetes, it seemed, were mostly employed to hack apart bamboo fences and pull them apart for those who didn’t have weapons.

It was unsettling to say the least, but at no time did we feel targeted, or for that matter even acknowledged by the two sides. Still, the leaders of Anne-Claire’s organization prudently organized our evacuation. So after two nights spent on the outskirts of town in a guesthouse run by the Passionists, a UN plane came to the airport and took us first to Kindu and then on to Goma the next day. In all, 86 homes were burned and from what I’ve heard, one other person was killed. We heard maybe a dozen shots throughout the day, coming from single-shot, colonial-era guns or homemade contraptions used for hunting. Our colleagues who have spent time in South Sudan assured us that we were lucky there are so few guns in Lodja. Machetes, they said, are much less efficient weapons. Little consolation, perhaps, to those who were in fact injured, but given the overwhelming emphasis on the community and not the individual, it’s not surprising, nor if you consider the West’s preternatural obsession with statistics, and not individual stories, to paint a picture of, and direct policies regarding, the developing world.

I didn’t take any pictures during the one eventful day, and instead just stood in dumbfounded incredulity on the porch of the office, watching with a mix of fear and curiosity. I did make some audio recordings, but I won’t post them here. After the fact the coordinated cheers sound something like I hope to write more when we return to Lodja. Most of the team has since returned, where they’re back at work. Anne-Claire and I are in Bangui, the capital of the Central African Republic, helping out with some of the emergency programming going on here. More on that will come soon as well…

There was an error retrieving images from Instagram. An attempt will be remade in a few minutes.

travel your dreams in style

A travel blog from a Delta Air Lines elite flyer at Boardingarea.com

Reviews and Images of the Best Gear on Earth