Anne-Claire and I have both commented on how backward this trip feels, touring around at the beginning and seeing people and places in Europe before getting down to what we expect will be the hard work of hiking every day for 500 miles.

But our frequent flier tickets worked best to fly into Paris and out of Lisbon, so we’ve made do. When life gives you lemons…

We spent a night with Anne-Claire’s former host family in Aix-en-Provence, about a 20-minute bus ride from the airport in Marseille – that is, the one that we flew into (MSP2). Anne-Claire raves about the meals Amable puts together.

Born in central Spain and raised in southern France, she brings highlights from Castilian and Provencal cooking to every meal, emphasizing fresh ingredients, balance (down to the colors of the food she prepares), and variety. I was surprised to learn that she doesn’t like to eat strong cheeses, but she says she loves buying them because there are so many to choose from.

Her long-time partner Michel is as curious as ever, proudly showing off pictures from a bike trip for a week or so last summer on the Camino de Santiago. He’s hiked the length we’re doing, from St.-Jean-Pied-de-Port to Santiago, twice, and has endless stories about the people he’s met along the way. Once, while he was talking about his time on the Camino, his voice began to crack and he had to wipe his eyes.

That’s one thing I didn’t expect – the importance that people attach to this pilgrimage. As I’ve said earlier, I don’t have a strong spiritual motivation for this hike. I’m here largely for the pleasure of walking a few hundred miles uninterrupted. I suppose I shouldn’t be surprised at its importance as pilgrims have been making the trek for hundreds of years. I’ll write more on all this later.

From Aix, we rented a car to get to Cahors. I mentioned how expensive it is to drive in France, and this is particularly true if you’re not traveling up one of the spokes of the bicycle wheel of thoroughfares radiating out from Paris but rather trying to hop between them as we were. Private companies have obliged drivers trying to avoid Paris, but at a high cost in tolls. We drove west to Cahors, which took about six-and-a-half hours. 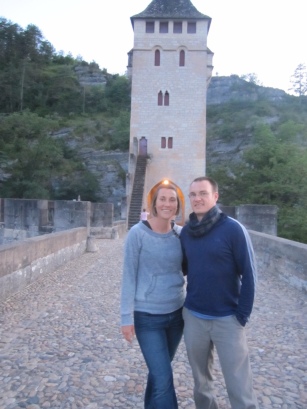 Again, we were visiting one of Anne-Claire’s former host families. We’d spent a few days with Cecile and her daughters at the end of our trip last summer. I had told them I had blogged about our trip, and of course they asked to see it. Forgetting what I’d written, I plugged the address into Google Translate, and – at least in this instance – it provided a particularly good interpretation of what I had written.

As Cecile and her oldest daughter Maylin read it, I sat shifting nervously in my chair – first, because it’s never fun to watch someone read what you’ve written, and second, because I started to remember what I had included about Maylin’s father. It was only a sentence and wasn’t untrue, but it’s never fun to read something negative about your parents.  Maylin wasn’t upset with me, though both she and her mother cried at points, and Cecile gave me a loud kiss on the cheek after she finished.

Though a lot has changed in their lives – Maylin is finishing up her first year at university and set to spend the summer in Spain, and Elora has started high school – the girls and their mother are still as close as before, and we had a wonderful visit.

I’m convinced Anne-Claire is on a mission to become friends with all the best cooks in France. Last year, before starting graduate school, she came to Cahors in southwestern France to brush up on her French. While the school itself turned out to be a disappointment, she made lifelong friends in the family she lived with – a woman, Cécile, and her two daughters, Elora and Maylïn – cemented with their shared appreciation of top notch food and excellent “black wine” from the region.

We made the trek from Saint-Jean-de-Luz on the Atlantic coast of France to Toulouse, and

then turned north to Cahors. Cécile and her girls met us at the train station and welcomed us into their home.

They live on five floors built around a spiral staircase, tucked in the town’s old section, which dates back to the 14th century. Strolling the narrow, gorge-like streets, you catch glimpses of arching stone windows and the ancient timbers that still form the endoskeleton of these shotgun homes (only here, you’d better point the gun skyward if you want the bullet to clear the building’s walls and occupants, rather than horizontally as you

After stashing our stuff on the second-floor room (ours for the three nights we stayed there), our hosts took us on a walk through Cahors, the highlight of which was seeing the spectacular Pont de Valentré, built in the 1300s. Legend has it that the bridge’s builder had to sell his soul to the devil to meet the construction deadlines. But to ensure that the bridge would never be completed, he gave the devil a sieve to collect the water needed for the last bit of mortar. The devil of course couldn’t carry any water with the sieve, leaving the bridge unfinished and thus saving the master builder’s soul. In retaliation for being tricked, the devil 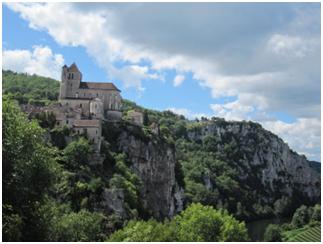 Our walked ended with a stroll along the Lot River, followed shortly thereafter by a delicious dinner.

The French pretty much have this whole food thing figured out. Every meal we had at Cécile’s had at least three courses. The first night we had rabbit in a mushroom sauce, and dessert was a caramel chocolate tart made by a pastry chef that Anne-Claire made friends with last summer. Other dishes included farsi – seasoned ground pork stuffed into tomatoes and zucchini – and fried duck, along with a smattering of foie gras (duck or goose liver) in various forms. I’m almost certain foie gras is Anne-Claire’s favorite thing on the planet, though I thought it was a little strange that she’d stop to thank

the ducks we saw sitting along the roadside.

Cécile and the girls’ father split up a while ago, and it sounds like he’s shirked his responsibilities to them a bit. The upshot of those difficulties is that the three of them have become as close as I’ve ever seen a mother and two teenaged girls. Maylïn and Elora are truly best friends, even at 17 and 15, and it’s obvious that Maylïn’s coming departure for university won’t be easy on anyone. When we visited, they were enjoying each other’s

company and the month of August that Cécile gets off for vacation.

One afternoon, we all went to a charming hilltop village called Saint-Cirq-Lapopie with incredible views of the Lot, the region’s namesake river. Picturesque doesn’t begin to describe the stone-paved streets and the curving red-tiled roofs typical of towns here and in the adjacent Dordogne region. I’ve been fortunate to live in some beautiful places, so I don’t often seek out the most attractive locales for travel, but this part of

France begs for a longer visit in the future.

Our stay in Cahors finished with an abbreviated meal of foie gras and a lasagna-like dish with thin layers of pasta and a light sauce. The real purpose of the evening was to sample the dozen or so desserts Cécile had bought from Anne-Claire’s friend’s pastry shop. Though we nearly made ourselves sick, we tasted an éclair stuffed so full of rich chocolate that the chef had sliced it lengthwise to accommodate it all, a lime tart with a basil ganache, a fraisier (strawberry cream and cake), a cake soaked in Cointreau, and a handful of equally inventive others. Even with a half-hour break midway through, I woke up the next morning still full.

travel your dreams in style

A Travel Blog from a Delta Air Lines Elite Flyer

Reviews and Images of the Best Gear on Earth